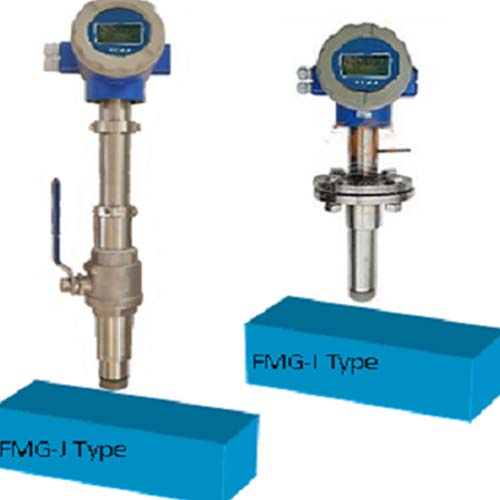 Electromagnetic flowmeters use Faraday's law of induction to detect flow. FGT's main business is the production of industrial flowmeters.

Insertion Electromagnetic FlowmeterThe working principle is based on Faraday's law of electromagnetic induction, which can provide bidirectional high-precision measurement. It is an ideal flowmeter for leak detection and is widely used in many fields. Today, I will mainly introduce the measurement objects and characteristics of the plug-in electromagnetic flowmeter, hoping to help everyone.

1. The measurement is not affected by changes in fluid density, viscosity, temperature, pressure and conductivity;

2. There are no obstructing flow parts in the measuring tube, no pressure loss, and the requirements for straight pipe sections are low;

3. The nominal diameter of the series is DN15～DN3000. There are various options for sensor lining and electrode materials;

5. The converter can be combined with the sensor to form an integral type or a separate type;

7. The flowmeter is a two-way measurement system, with three built-in totalizers: forward total, reverse total and difference total; it can display. Zhuang, reverse flow, and has a variety of outputs: current, pulse, digital communication , HART;

The volume flow rate is equal to the product of the fluid velocity v and the pipe cross-sectional area (πD²)/4. When the pipe diameter D is fixed and the magnetic induction intensity B is kept constant, the measured volume flow rate has a linear relationship with the induced potential. If an electrode is inserted on both sides of the pipe, an induced potential can be introduced, and the volume flow can be obtained by measuring the magnitude of this potential.

1. Electromagnetic electrode system: its function is to generate a uniform DC or AC magnetic field. The DC magnetic circuit is realized by a permanent magnet, which has the advantages of simple structure and less interference by the AC magnetic field, but it is easy to polarize the electrolyte liquid in the measuring catheter, so that the positive electrode is surrounded by negative ions, and the negative electrode is surrounded by positive ions. Surrounding, that is, the polarization phenomenon of the electrodes, and leads to an increase in the internal resistance between the two electrodes, thus seriously affecting the normal operation of the instrument. When the diameter of the pipeline is large, the permanent magnet is correspondingly large, cumbersome and uneconomical, so the electromagnetic flowmeter generally adopts an alternating magnetic field, and is generated by the excitation of a 50HZ power frequency power supply.

5. Electrode: Its function is to draw out the induced potential signal proportional to the measured value. The electrodes are generally made of non-magnetic stainless steel and are required to be flush with the lining so that the fluid can pass unobstructed. Its installation position should be in the vertical direction of the pipeline to prevent sediment from accumulating on it and affecting the measurement accuracy.

6. Shell: Made of ferromagnetic material, it is the outer cover of the excitation coil of the distribution system, and isolates the interference of external magnetic fields.

Electromagnetic Flowmeterworking principle:Electromagnetic FlowmeterAccording to the principle of electromagnetic induction of the flange, a pair of detection electrodes are installed on the pipe wall which is perpendicular to the axis of the measuring tube and the line of magnetic force. When the conductive liquid moves along the axis of the measuring tube, the conductive liquid cuts the magnetic line of force to generate an induced potential, which is determined by Two detection electrodes are detected, the value is proportional to the flow rate, and its value is: E=B*V*D*K

The sensor transmits the induced electromotive force as a flow signal to the converter. After signal processing such as amplification, conversion filtering, etc., the instantaneous flow and cumulative flow are displayed by a dot-matrix liquid crystal with backlight.

(1) Only conductive medium can be measured

(Use special meter for low conductivity)

Cannot measure non-conductive medium, such as gas, oil, such as medium containing a large amount of

(2) There must be a magnetic field

The flowmeter does not work, and the stability of the excitation current directly affects the measurement of the instrument

(Measuring tube should be made of stainless steel)

(3) The actual measured value is the fluid flow rate

Measuring the volume flow of a medium

What is the use of electromagnetic flowmeter? | Our performance